8 Surprising Facts About Mortgages You’ll Be Dying to Share 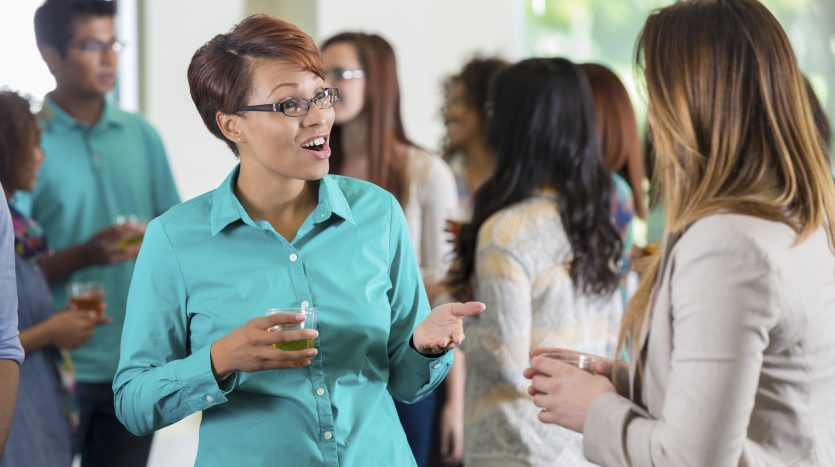 Mature adult African American woman is staff member at community college. She is talking to prospective student during mixer or meet and greet party during college orientation. Diverse students and adults are talking in background.

Mortgages may seem like dreadfully dry cocktail party fodder at first glance—after all, who wants to talk fixed versus adjustable rates over a martini, just for fun? Au contraire: Mortgages are often way more compelling than just a blur of paperwork and numbers. As proof, we decided to trot out some of the juicier stories and statistics that we’ve encountered about these all-important home loans.

Read on to learn the mysterious links between mortgage and death, why you should be very glad you weren’t mortgage shopping in 1981, and much more! Your next cocktail party guests will thank you.

Derived from the Old French term mort gage, a home mortgage is called as such because of the way property is purchased. According to early Anglo-Norman law, the “pledgor” (i.e., the borrower) who buys a home using a loan must pay back the debt in order to become the rightful owner of the property. Given how much money was at stake, purchasing a home was associated with “mort” (i.e., death)—making buying property one of the deadliest of transactions. (Side note: To “amortize” a loan means to “kill the debt.”)

This might be a bit hard to remember, considering America’s recent historically low interest rates, but let’s not forget that there are also record highs. In October 1981, the average interest rate on a 30-year fixed-rate mortgage was a whopping 18.45%. In essence, having a mortgage was a lot like having a credit card. A lousy credit card. Talk about stressful! Here’s to hoping they never climb that high again.

… but rates have been even lower than they are now

According to the man’s wife—who took to Reddit in February 2016 to vent her frustrations—her hapless husband spent the entire monthly mortgage on four pairs of sneakers. They were Yeezys. Given their monthly mortgage bill was $2,500, that turns out to be $625 per pair.8 Surprising Facts About Mortgages You’ll Be Dying to Share – Real Estate News and Advice – realtor.com

According to the wife (no names were used), her sneakerhead spouse defended his action by saying “he had to buy two since he wanted ‘one to stock and one to rock.’ I was livid at this point.”

Laugh all you want, but there’s a cautionary tale here: If you have a spending problem, automate your monthly mortgage payments so that the money goes straight from your bank account to your mortgage servicer—effectively removing the temptation to burn the cash on a shopping spree. And maybe check into your beloved’s strange obsessions before tying the knot.

The Facebook founder refinanced his Palo Alto home in 2012 with a 30-year adjustable-rate mortgage. His interest rate: only 1.05%. (Try to beat that!) Given that the previous interest rate on Zuckerberg’s mortgage was 1.75%, refinancing saved him approximately $1,981 a month.

You might be wondering: Since he’s so rich, why not just pay for the home in cash? Because the relatively low cost of mortgage debt—and the access to liquidity you get—often makes getting a mortgage a smarter move than buying the home outright. Even for the obscenely wealthy.

Just ask Allen Iverson, the former NBA superstar who bought a 6,848-square-foot, six-bedroom, nine-bathroom home for $3,875,000 in 2008 and let the property slip into foreclosure just three years later. Iverson isn’t the only celebrity with mortgage problems. Rapper Lil’ Kim‘s home is in danger of going into foreclosure, with reports that the singer has stopped making mortgage payments on the $2,275,000 mansion that she purchased in 2002. Meanwhile, 50 Cent recently needed to sell his $8 million Connecticut mansion after filing bankruptcy last year. (His monthly mortgage payment was a whopping $17,400!)

Indebted homeowners had their own Robin Hood

Rumor has it that a bank robber named Charles Arthur “Pretty Boy” Floyd, in addition to stealing money, destroyed mortgage documents to free citizens from their debts. In 1933, his life ended in typical bank robber fashion for those days—in a huge shootout with police—but his reported Robin Hood activities made him a popular hero with the public. A dead hero.

In Scotland, homeowners paint their front door red to signify that they’ve paid off their mortgage. In the U.S., homeowners sometimes burn their last bill in “mortgage burning parties,” a practice made famous back when Archie Bunker lit his mortgage note on fire in an episode of “All in the Family.” Hey, if you’ve managed to pay off your mortgage, you should definitely celebrate however you see fit!

Will a Sparkling-Clean Home Appraise for More Money?
Need a Down Payment? Do These 3 Things First