Priceless: A Presidential Property As this year mark’s the centennial of JFK’s birthday, we’re showcasing the home where the 35th President was born. 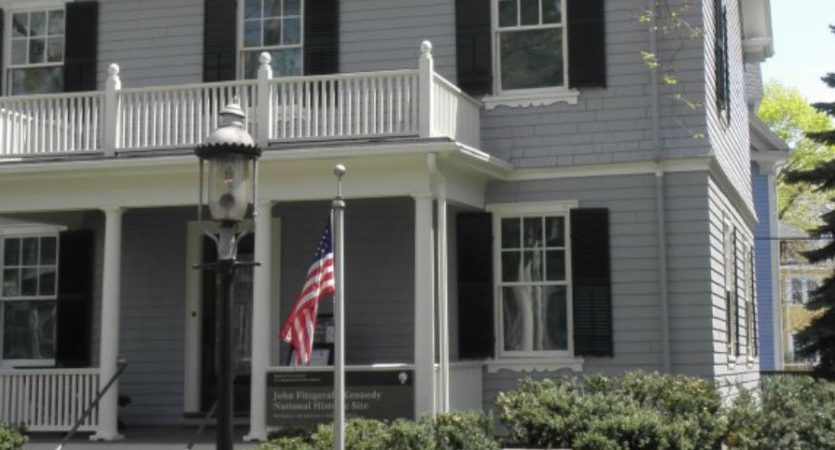 The following is a guest post from Danielle Schlesier of Coldwell Banker Residential Brokerage in Brookline, MA

Tucked away on one of Brookline’s most sought after tree-lined side streets is a five bedroom, 1 ½ bathroom house where no one has lived for more than 50 years. And despite its potential value in today’s hot real estate market, 83 Beals Street is not for sale and likely won’t ever be.

That’s because the home is where our 35th president, John F. Kennedy, was born 100 years ago on May 29th 1917. The National Park Service, which now owns the house, tells its story this way:

The three-story Colonial was built in 1909 and in 1914 Joseph and Rose Kennedy bought it for $6500. According to Jason Atsales, Lead Park Ranger, Rose once described the home: “It was a nice old wooden-frame house with clapboard siding; seven rooms plus two small ones in the converted attic, all on a small lot with a few bushes and trees. It would have blended perfectly into most of the Main Streets of America.” Three years later, Rose gave birth to their second son John in the upstairs master bedroom and three years after that the family moved to a larger home three blocks away. The house changed owners in 1928 and again in 1944 and 1953. Although each owner made improvements, the layout for the most part remains original.

The Town of Brookline commemorated the President in 1961 with a plaque outside the home and according to several news reports it became a gathering place for mourners after his assassination. In 1966 Rose Kennedy along with her nephew bought back the house for $55,000 and began redecorating it as she remembered it looked in 1917. Rose then donated the house to the National Park Service and, on what would have been Kennedy’s 52nd birthday, it was officially dedicated as the John Fitzgerald Kennedy National Historic Site.

Imagine, however, if Rose’s vision never came to be and the house continued to change hands. In today’s market it is quite valuable. But by today’s standards – as we in real estate like to say – it “needs updates.” There’s certainly no granite or stainless steel in the kitchen; in fact, the stove is combination gas and coal burning and there’s a wood ice box instead of a refrigerator. The first floor living area layout is definitely not open concept and there is no master suite. But the bones are classic and the location near Coolidge Corner is desirable. Comparing it to recent sales in the neighborhood, if it were to go on the market today it could likely be listed for $1.5 million even without any updates.

“I often say that because a president was born here though, ‘that it’s priceless’ (corny, I know)–but it seems to go over well with the crowd,” said Atsales.

I’d have to agree. Of course, the Realtor in me would be the first in line to compete for the listing. But the Brookline resident and history buff in me appreciates Rose’s foresight for the gift she gave us to enjoy for generations to come.

You can learn more about this year’s JFK Centennial Celebration by visiting: https://www.nps.gov/jofi/planyourvisit/jfk-100.htm